Question :
What do you mean by word Computer, Explain it with its features.

Answer :
Question :
What is volatile memory?

RAM is known as Volatile Memory because when we switch off the computer its data is vanished.


Define each of the following:

(c) megabyte: This is the unit of memory in computer. 1 megabyte = 1024 kilobytes

(d) gigabyte: This is the unit of memory in computer. 1 gigabyte = 1024 megabytes

Question :
State the basic units of computer. Name the subunits that make up the CPU, and give the function of each of the unit.

Question :
What is the function of memory? What are its measuring units?

The computer memory is a temporary storage area. It holds the data and instructions that the Central Processing Unit (CPU) needs. Before a program can run, the program is loaded from some storage medium into the memory. This allows the CPU direct access to the program. Its measuring units are byte, kilobyte, megabyte, gigabyte, terabyte etc.

The primary memory is called destructive write because the data enter here are temporary. That‟s why your RAM gets cleared after every restart.

Question :
What is the role of CPU of a mobile system?

A mobile processor is found in mobile computers and cellphones. A CPU chip is designed for portable computers, it is typically housed in a smaller chip package, but more importantly, in order to run cooler, it uses lower voltages than its desktop counterpart and has more sleep mode capability. A mobile processor can be throttled down to different power levels or sections of the chip can be turned off entirely when not in use. Further, the clock frequency may be stepped down under low processor loads. This stepping down conserves power and prolongs battery life.

Question :
What is SoC? how it is different from CPU? Why is it considered a better development?

A system on a chip (SoC) combines the required electronic circuits of various computer components onto a single, integrated chip (IC). SoC is a complete electronic substrate system that may contain analog, digital, mixed-signal or radio frequency functions. Its components usually include a graphical processing unit (GPU), a central processing unit (CPU) that may be multi-core, and system memory (RAM).

Because SOC includes both the hardware and software, it uses less power, has better performance, requires less space and is more reliable than multi-chip systems. Most system-on chips today come inside mobile devices like smartphones and tablets. These are considered a better development because of their small size and speed capability.

Question :
Briefly explain the basic architecture of a computer.

Computer organization refers to logical structure of a computer describing how its components are connected to one another, how they affect one another‟s functioning and contributes to overall performance of computer. Computers follow the „IPO‟ principal i.e. Input Process Output (That means a certain input is processed to Generate specific output)

Question :
What is the function of CPU in a computer system? What are its sub units?

`The central processing unit (CPU) of a computer is a piece of hardware that carries out the instructions of a computer program. It performs the basic arithmetical, logical, and input/output operations of a computer system. The CPU is like the brains of the computer - every instruction, no matter how simple, has to go through the CPU. So let's say you press the letter 'k' on your keyboard and it appears on the screen - the CPU of your computer is what makes this possible. The CPU is sometimes also referred to as the central processor unit, or processor for short. So when you are looking at the specifications of a computer at your local electronics store, it typically refers to the CPU as the processor. Its sub units are:

Question :
What functions are performed by the control unit?

The CU controls and guides the interpretation, flow and manipulation of all data and information. CU sends control signals until the required operations are done properly by ALU and memory. Another function of CU is the program execution. It means carrying out all the instructions stored in the program. CU gets program instruction from the memory and executes them one after the other. CU acts as a supervisor by controlling and guiding the operation taking place.

Question :
Distinguish between CPU and ALU?

Difference Between ALU and CPU is that arithmetic logic unit (ALU), another component of the processor, performs arithmetic, comparison, and other operations. While Processor also central processing unit (CPU), interprets and carries out the basic instructions that operate a computer.

The main difference between CPU and ALU is that the CPU is an electronic circuit that handles instructions to operate the computer while the ALU is a subsystem of the CPU that performs arithmetic and logical operations.

Question :
What is the function of output unit in a computer system?

Input devices are the hardware that give computers instructions. Output devices relay the response from the computer in the form of a visual response (monitor), sound (speakers) or media devices (CD or DVD drives). The purpose of these devices is to translate the machine's response to a usable form for the computer user.

Internal memory is usually chips or modules that you attach directly to the motherboard. Internal Memory is a circular disc that continuously rotates as the computer accesses its data. External memory often comes in the form of USB flash drives; CD, DVD, and other optical discs; and portable hard drives.

A ROM chip is a non-volatile storage medium, which means it does not require a constant source of power to retain the information stored on it. A RAM chip is volatile, which means it loses any information it is holding when the power is turned off. Both of them are known as primary memory as they can directly work with CPU.

Question :
What are major functional components of a mobile system?

Major functional components of a mobile system are-

Question :
What is the role of Power Management Unit in a mobile system?

It also contains a collection of different functions like battery charging, monitoring and supplying many different voltages these systems require. It also contains software controlled turn-on and turn-off feature to optimize the power consumption and battery life.

Question :
What is GPU? How is it useful?

Graphics Processing Unit assists the CPU by handling the visuals, other graphically-rich applications. In short, GPU handles all graphics-related chores of a mobile CPU.

1) Abacus : Abacus was discovered by the Mesopotamians in around 3000 BC. An abacus consisted of beads on movable rods divided into two parts. (Fig-1) Addition and multiplication of  numbers was done by using the place value of digits of the numbers and position of beads in an abacus. 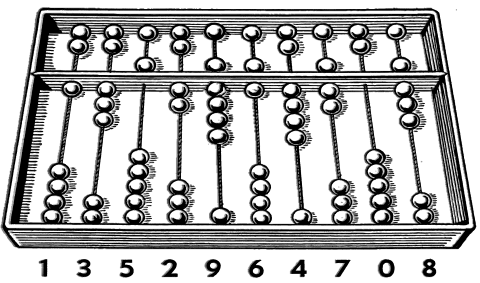 The Chinese further improved on the abacus so that calculations could be done more easily. Even today abacus is considered as an apt tool for young children to do calculations. In an abacus, each row is thought of as a ten’s place. From right to left , row no-1 represents the one’s column and the second column represents ten’s place. The third column represents the hundred’s place and so on. The starting position of the top beads (representing the value of five) is always towards the top wall of the abacus while the lower beads (representing the value of one) will always be pushed towards the lower wall as a starting position. 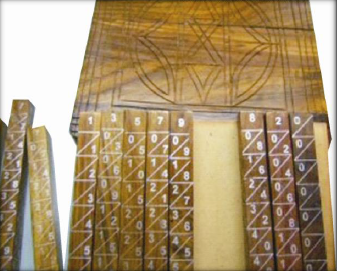 3) Pascaline : Blaise Pascal, a French mathematician invented an adding machine in 1642 that was made up of gears and was used for adding numbers quickly. This machine was also called Pascaline and was capable of addition and subtraction along with carry-transfer capability. It worked on clock

work mechanism principle. It consisted of various numbered toothed wheels having unique position values. The addition and subtraction operations was performed by controlled rotation of these wheels.

4) Leibnitz’s Calculator : In 1673 Gottfried Leibnitz, a German mathematician extended the capabilities of the adding machine invented by Pascal to perform multiplication and division as well. The multiplication was done through repeated addition of numbers using a stepped cylinder each with nine teeth of varying lengths. 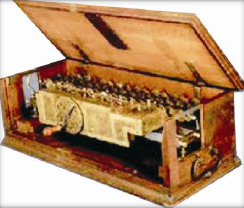 An analog computer works on varying physical quantities. The data input to a computer is continuous in nature irrespective of the variations in input and the results are obtained after comparison.


What is a digital computer?

A digital computer accepts data in the binary form:

Zero (0) means OFF or low signal

One (1) means ON or high signal

It gives results in terms of digits. All personal computers and laptops are digital in nature.


What is meant by C++ (as a computer language)?


What is an assembler?

Assembler is a software which is used to convert a program written in assembly level language into a machine level language. It helps a computer to perform its basic operations


Differentiate between the Compiler and Interpreter


What are the limitations of machine level languages?

The limitations of machine level languages are:


Enlist three features of the second generation of computers.

Three features of the second generation of computers are as follows:


What are the advantages of high-level languages?

Answer :
The advantages of high-level languages are-
Question :


State two limitations of the first generation of computers.

Two limitations of the first generation of computers are:


Give three features of the third generation of computers.

Three features of the third generation of computers are: